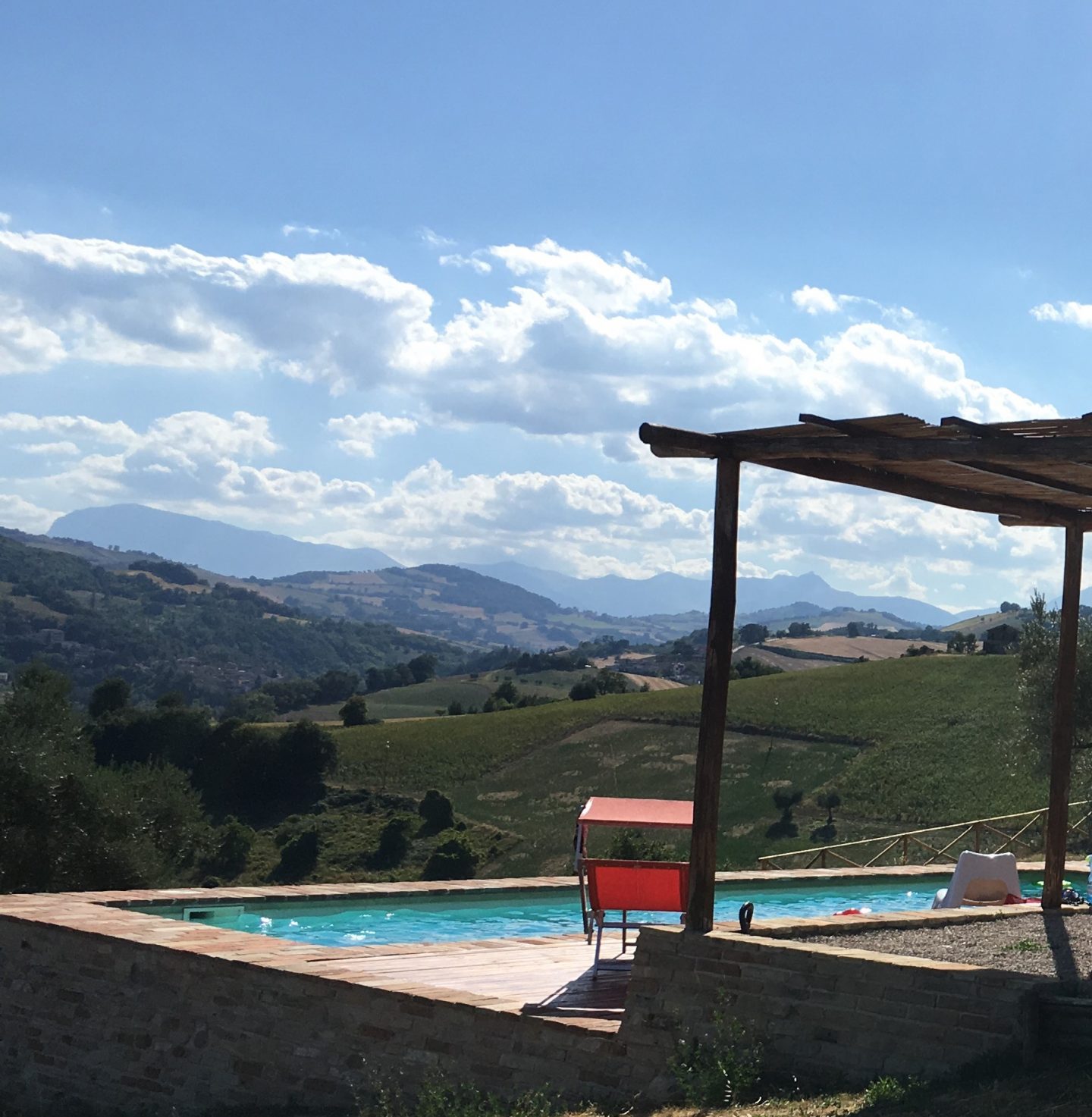 This summer, we enjoyed a villa holiday in Le Marche, a region which stubbornly remains off the radar to most non-Italian holidaymakers in spite of it offering everything a family could wish for from a summer holiday (in my opinion anyway). When I worked in the travel industry I was forever singing the region’s praises to PR agencies and journalists but it appears this fell on deaf ears. Well, their loss was our gain in late July as we explored tranquil villages, ate like kings and soaked up the sun on the fabulous Adriatic coast. And if you’re looking for a Le Marche villa with pool, the property we found takes some beating. 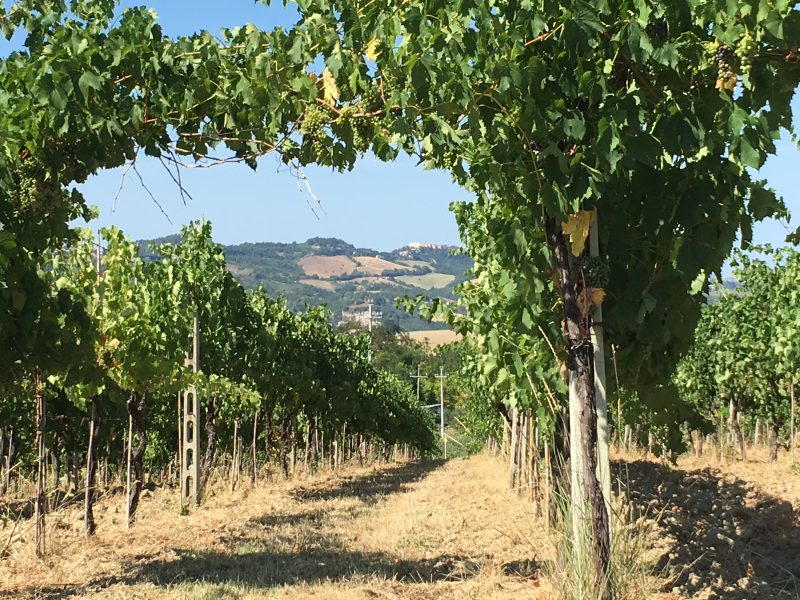 We stayed at Casa Ulissi for our villa holiday in Le Marche, a converted watchtower perched on the side of a hill just below the tiny village of Montedinove which in turn is located midway between the Sibillini Mountains and the Adriatic Sea.

Casa Ulissi is perfect for large families or groups of friends. Of the five bedrooms, there are three doubles, one twin and a bedroom with bunk beds. One of the double bedrooms occupies two upper floors with its own living room and bathroom, ideal for those who like to keep a bit of space between themselves and their loved ones. WiFi is available too in case that’s a deal breaker among a certain age group.

The owner has restored the building with care and style. There is a great balance between original features such as beamed ceilings and tiny windows (perfect for keeping the heat out) and modern touches such as the well equipped kitchen and the contemporary bathrooms. Much of the furniture is antique or reclaimed but, like most rental properties (and homes in general), there are unmistakable Ikea “accents” here and there.

I didn’t take any internal images of the house for this post as I’m still in the early stages of my travel blogging career and rate taking an immediate dip in the pool a lot higher than meticulously photographing my living space before it is destroyed by small children. However, the agent’s website has a pretty comprehensive selection of images and I can attest to their accuracy in terms of style and comfort. They also have a great selection of villas in Le Marche with pools (this is not a paid advert by the way).

Outside is where we spent most of our time (in fact, we didn’t use the vast and beautiful indoor dining table once). A gravelled terrace surrounds the property on three sides and it’s here we enjoyed many great meals. I won’t try to list the superlatives which sum up the sunsets and (thanks to my three year old…) sunrises we saw from Casa Ulissi, hopefully the photographs do them justice.

The sun sets over the hills near Casa Ulissi

Unfortunately, wasps were quite a feature at mealtimes. However, they were not aggressive, just appreciative of the spread we’d laid on so no one was stung. Building elaborate wasp traps became something of a pastime for the children.  They (the wasps, not the children) all disappeared around sunset.

Evenings were delightful at Casa Ulissi. At quite an elevation, there was always a gentle breeze, belying the fierce daytime temperatures at sea level. 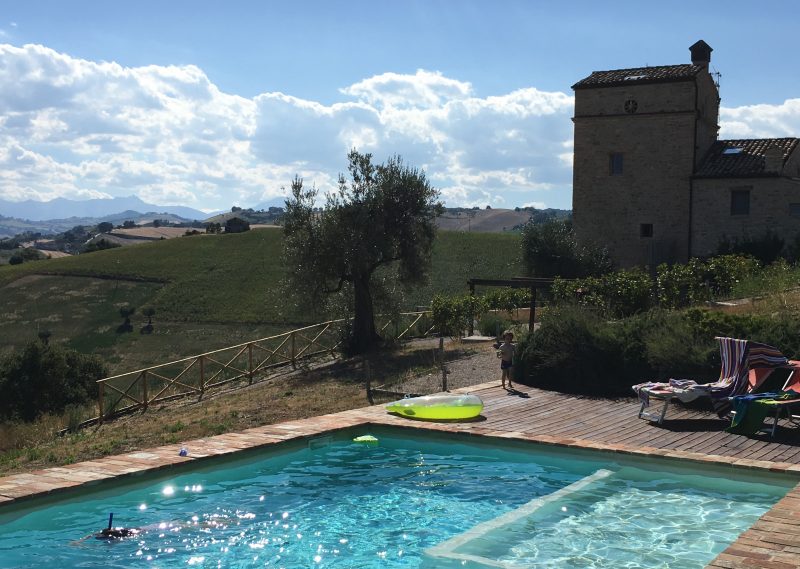 Villa holiday in Le Marche: our swimming pool for the week

To one side of Casa Ulissi is a good size swimming pool. My children have yet to gain that terrifying confidence of leaping into an unfamiliar body of water so the enclosed shallow area was perfect for them while the older children enjoyed practicing their diving in the deeper section.

A villa holiday in Le Marche: swimming pool with a view at Casa Ulissi

It was a short, steep drive from the villa to Montedinove, a proud community where on one occasion locals emerged from the village museum and encouraged us to come in and learn about the history their tiny settlement.

The Adriatic Sea is just visible on the horizon from Montedinove.

For such a small and remote place, Montedinove has quite a trendy bar offering very good aperitivi. The village was quiet enough for our little gang of children to wander off and explore while we sampled some of the wines and antipasti.

Just two minutes’ drive (or 10 minutes’ walk if you’re feeling confident about the return hike in the heat) down the hill from Casa Ulissi is Le Vigne di Clementina Fabi, a particularly enjoyable vineyard in which to while away an afternoon. Not only did we sample some excellent wines but we were also given an amazing array of local hams, cheeses, jams and breads to indulge in. Loretta, the owner, believes food is an essential part of wine tasting and we all agreed.

Part of our spread at Le Vigne di Clementina Fabi

On Loretta’s recommendation, we spent a large part of our final day having lunch at Ristorante la Madonnina, hidden away somewhere near the village of Rotella on a neighbouring hilltop. There was no menu, just a seemingly unending number of dishes; fried quails’ eggs served with crispy pancetta and wild boar ragu were some of my favourite delicacies from the meal which was washed down with jugs of local wine.

I do like to be beside the seaside in Grottammare.

When we weren’t eating, which was rare, we spent much of our time at Grottammare, the nearest beach resort to our villa. It was a pleasant 30 minute drive past plum orchards, vineyards and sunflower fields with enough farm machines in action to keep our two sons entertained.

Coffee on the beach in a proper cup

Backed by a promenade and lined with pizzerias, ice cream parlours and bars, Grottammare is everything I could want from a beach resort at this stage of my family’s life. Akin to bathwater in both depth and temperature, the sea here is delightful for reluctant toddlers; parents meanwhile can relax on sun loungers while sipping a morning cappuccino.

Never visited Le Marche? Find out why it’s a great destination for children. Le Marche works really well as part of a road trip with Tuscany and Le Marche.

Booking
We booked Casa Ulissi through Felix Villas, a small UK-based villa company with a great selection of properties on their site. I would definitely use them again.

Travel
There are two airports within 90 minutes’ drive of the villa, Ancona and Pescara, but if you’re travelling from the UK you are limited to Ryanair and Stansted with both of them. After checking lots of different routes, we opted to fly into Rome Ciampino as it was significantly cheaper. It’s a 3 hour drive from Rome to the villa but we saved around £100pp on the flights. The drive across the country is pretty straight forward if you’re not in a hurry. We took two different routes through the mountainous Gran Sasso National Park, both stunning and peaceful with good roads.

Can you recommend any villas in Le Marche which work well for an Italy family holiday? Let me know in the comments below.