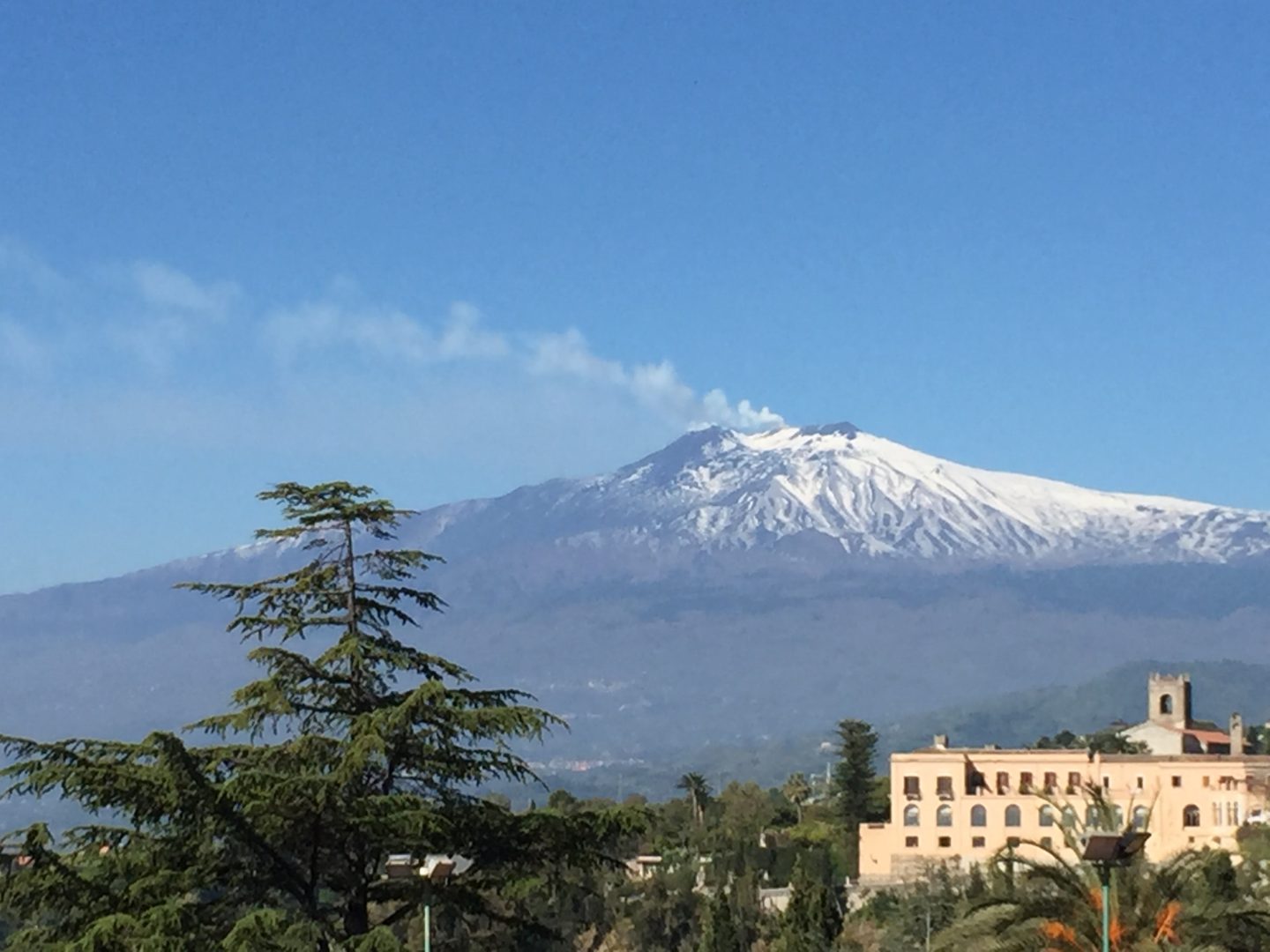 Have you ever considered taking a guided tour of Mount Etna? Volcanoes have all the elements you need to engage children’s imagination: smoke, fire and huge scale destruction. As geography lessons go, volcanoes take some beating. With this in mind, I knew we would have to explore Mt Etna when I was planning our trip to Sicily earlier this year.

Exploring the slopes of Mt Etna

Along with the Aeolian Island of Stromboli and Mt Vesuvius near Naples, Mt Etna is one of three active volcanoes in Italy. Etna and Stromboli are continuously active whereas Vesuvius hasn’t erupted since 1944. There are countless other volcanoes in Italy which are classed as dormant having not erupted for several hundred years.

Mt Etna had erupted a few weeks before our visit to Sicily in April and I had been checking daily whether the eruption would continue during our trip. What could be better than watching a volcanic eruption from the window of our aeroplane? (at a safe distance of course). Unfortunately by the time we arrived, the powerful belches of lava had slowed to a gentle flow which wasn’t easily visible from the directions we viewed the volcano. However, there was a continual cloud of smoke emanating from the summit, a sure reminder of what had come before.

We finally approached Mt Etna following a week or so of exploring central and eastern Sicily, during which time the volcano, at 3,329m (10,925ft) high, was frequently visible – including some 70km away when we were in the hilltop town of Enna.

Mt Etna is visible some 70km away from hilltop Enna.

Despite the volcano’s destructive nature, the “Mother of Sicily” as she is fondly described by some, feeds the island through her rich soil; olives, citrus fruit and pistachios thrive and the region’s vineyards produce excellent wine. Around a quarter of Sicilians live on Etna’s slopes and the volcano is also one of Sicily’s premier tourist attractions.

It is possible to make your own visit to Mt Etna via Rifugio Sapienza where there is a cable car, eateries and shops as well as guides available for hire. However, I decided we would all benefit from pre-booking a guide so I picked EtnaFinder after reading about them in a Daily Telegraph article by Italy expert Lee Marshall. 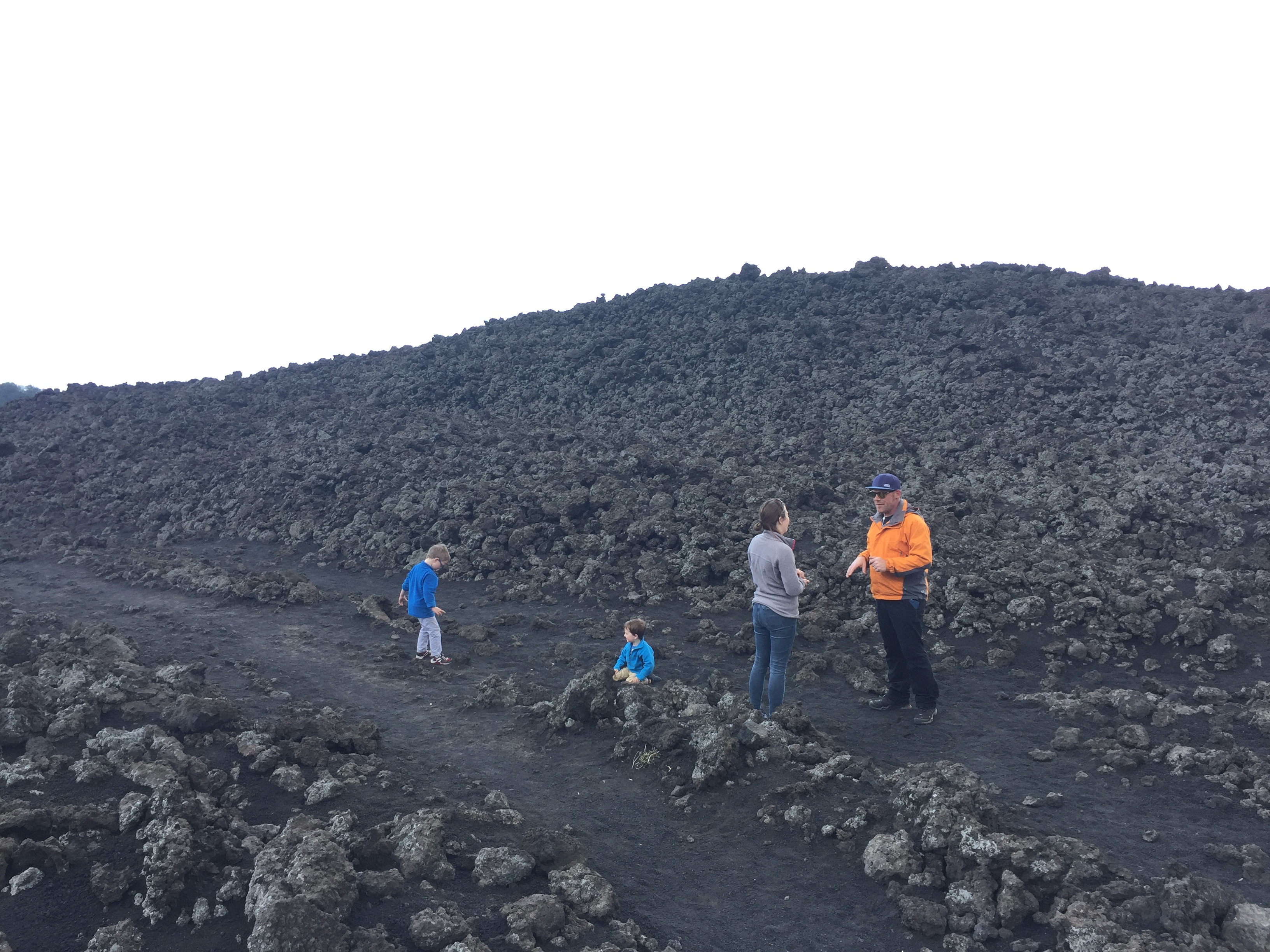 Guided tour of Mount Etna: learning about the volcano from Marco of EtnaFinder

We met our guide Marco near Giarre, which was on route to our final destination of Taormina later that day. It doesn’t take a great deal to fire up my sons’ excitement: they were thrilled at the prospect of swapping our boring hire car for a proper 4×4 which would take us over the (very) bumpy terrain.

All Italians, it would seem, are brilliant with kids. Marco, a parent himself, was no exception. He explained the workings of a volcano in terms our five year old could understand. When booking the trip, I’d explained to EtnaFinder that we wouldn’t be up for long hikes as our 3 year old isn’t keen on covering big distances without a bike or scooter so an itinerary was designed around this.

We visited old lava flows and spotted where a house had been consumed by lava. The children delighted in sitting on a “lava bomb”, a large volcanic rock which had been spewed from a crater during a particularly violent eruption.

Sitting on a lava bomb

Marco had endless stories to tell of villages flattened and miraculous escapes as well as an interesting discourse on what it means to be a Sicilian today. The tour culminated with a visit to a lava cave where we donned hard hats and climbed down with ropes and explored by torchlight.

On EtnaFinder’s advice, we’d packed warm clothing but it was actually fairly mild at the altitudes we reached even though there was still snow cover in places. We enjoyed a good meal at Rifugio Citelli although we had to forego an early lunch and return later as a tour group just got in ahead of us. Our three year old didn’t appreciate this; combined with our early start and a delay to what had become his daily siesta, he was rather unhappy until he had a little snooze while we were exploring the cave. However, Marco was excellent at lightening the mood and ensured the rest of the day was a success. If you’re exploring Mt Etna with young children, it’s worth getting your lunch order in early. 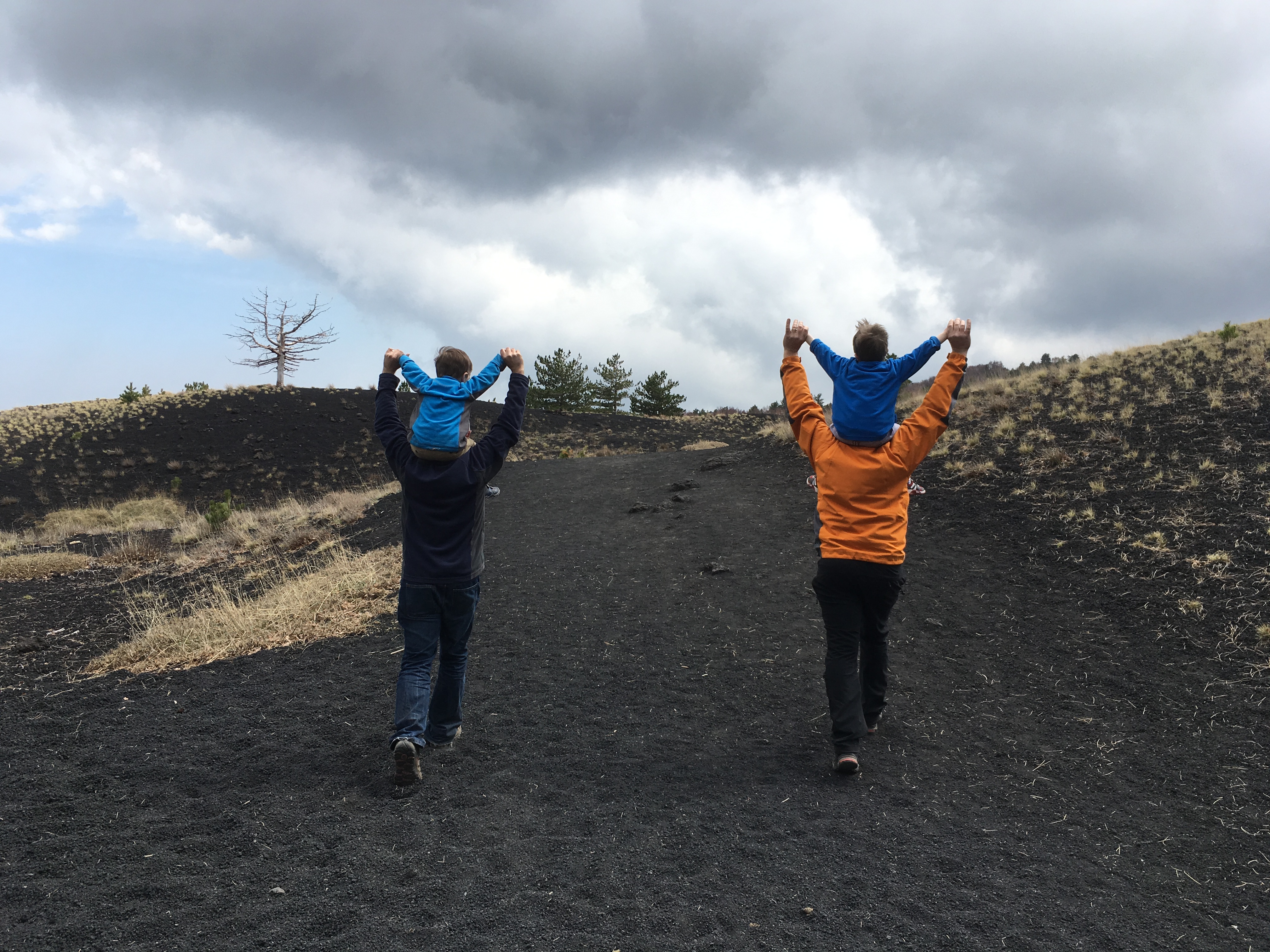 A trip to Mt Etna, particularly with a private guide, is an excellent geography lesson for kids, and adults. As Sicily has so much to offer families I’m sure we’ll return to Mt Etna in the future, hopefully when she’s in a more explosive mood.

Things to do in Sicily with kids

My guide to beaches in Sicily

Top 10 things to do with kids in Syracuse, Sicily 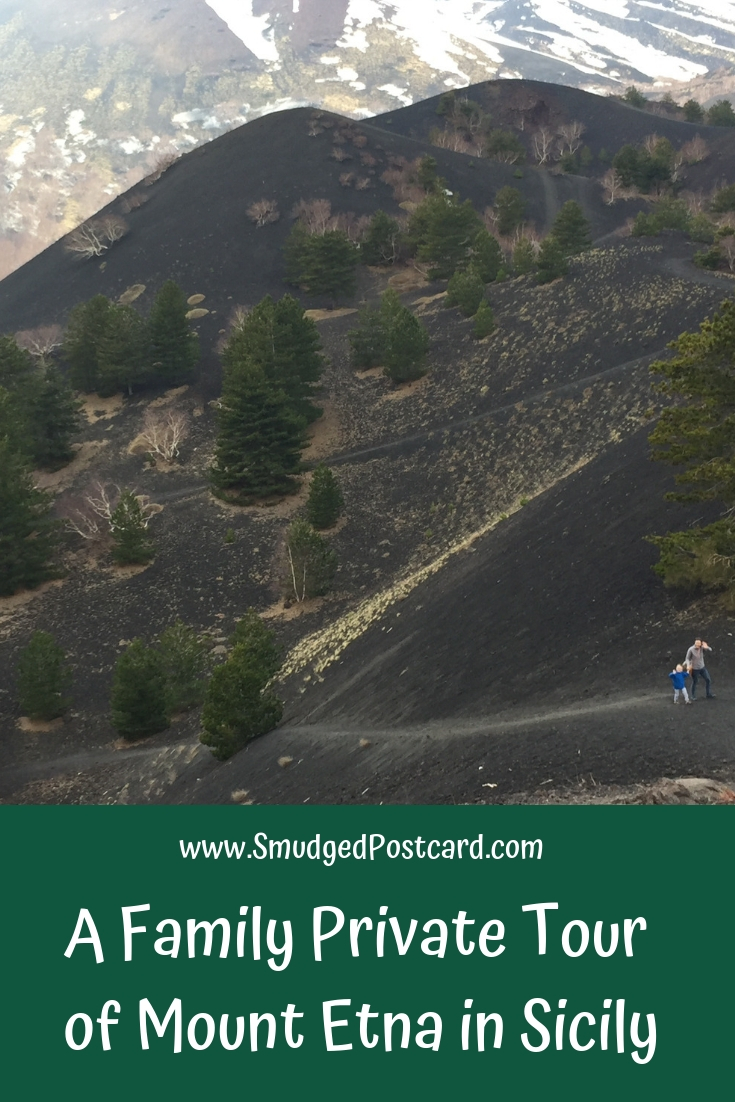 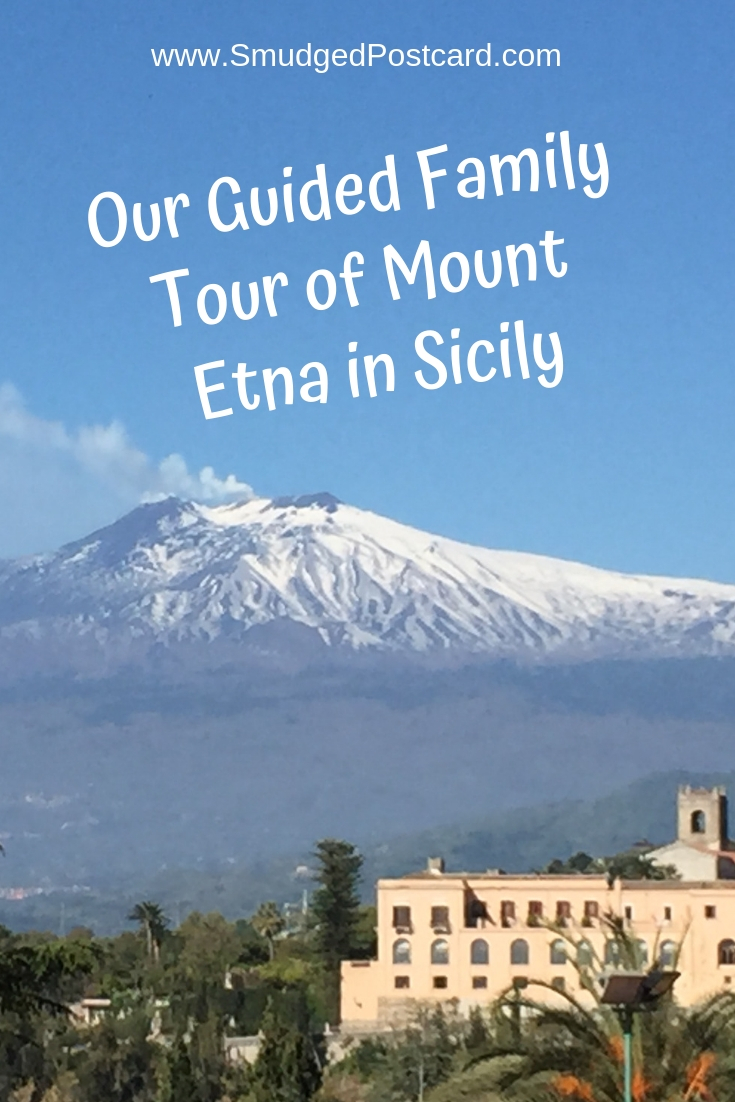