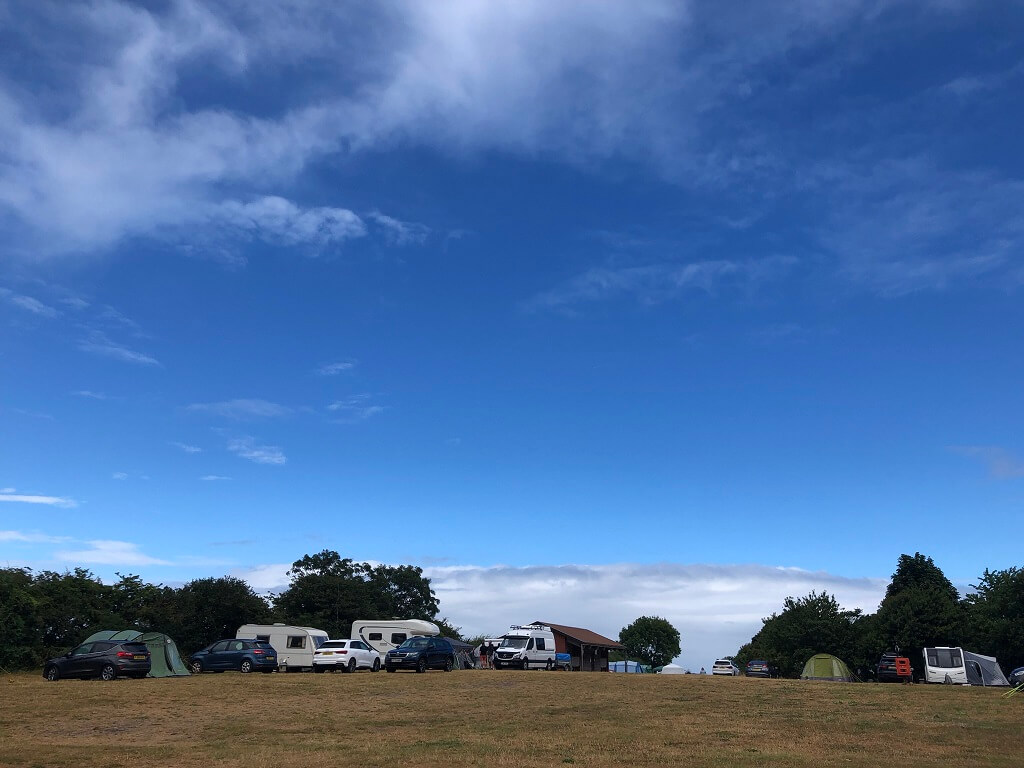 What are the key ingredients for a decent campsite? Good showers? Plenty of space? Somewhere for the kids to play cricket? Well, our most recent camping discovery, Manor Farm campsite at East Runton in Norfolk ticks all these boxes and more.

We spent three nights at this family friendly campsite near Cromer at the end of July 2022. It’s larger than the sites we normally choose but manages to retain a peaceful and relaxed atmosphere.

Manor Farm has a great location – walking distance to the sandy beach, pier and shops at Cromer.

Click here to read my article about the best beaches across the UK for families.

There are several camping fields to choose from at Manor Farm depending on whether you want dog-friendly camping, caravan pitches or just a big open space to pitch your tent. We stayed in Marl Pit field which is dog-free. Unless you need an electric hook up, the field has unmarked pitches so you can set up wherever you like. Some pitches are close to a rather good play area and others have an enviable sea view.

I had a peek into the other two fields. Byworth (for caravans) had lovely sea views but was a bit more exposed to the elements. Moll’s Meadow looked good but the play area was smaller than the one at Marl Pit.

As the campsite is part of a large working farm, there are various tracks and paths threading their way through the site – you can wander through the woods and follow the track down to Cromer (15 minutes walk). We took this path each day of our stay, it’s a slight incline down to the coast but the kids, fuelled by ice cream and donuts, managed the return journey without too much grumbling!

In Cromer there’s a decent selection of shops including an independent butcher. On the walk back to the campsite there’s a choice of Morrisons and the Co-Op. Although Manor Farm campsite is close to Cromer, it felt far enough away to feel secluded and rural. It was great to abandon the car for the whole of our stay. If you’re not keen on walking into Cromer, there is plenty of parking in the town centre and next to the beach.

Manor Farm campsite has a dedicated field for football and kite flying but plenty of children just use the spacious camping fields for their games – there’s loads of space for everyone to enjoy. Everyone was really friendly and there was a quite atmosphere during our stay – a large family group were celebrating an 80th birthday. It is very much a family campsite, by 10pm it was very quiet.

The toilet blocks are modern and well maintained. The shower cubicles are spacious with plenty of space for towels and clothes without everything getting wet when you turn the shower on.

During the summer there are mobile takeaway food trucks at the campsite – Thai and Indian. Our friends tried the Thai during their stay last summer and gave it the thumbs up.

If you’re not keen on camping but like the outdoor lifestyle, there’s a collection of converted farm buildings offering a more luxurious stay – ranging from one to four bedroom accommodation, these barns look lovely.

Cromer is a fun seaside town. There’s a traditional pier – which, unlike most, doesn’t have an amusement arcade (fear not, there’s one on the promenade). Instead there’s a theatre and a life boat station at the end which can be visited on certain days. There’s a shop on the pier selling crabbing gear – buckets, lines and stinky bait. This is a very popular pastime at Cromer – there are scores of people on the pier, young and old, hoping to reel in one of these famous Norfolk crustaceans.

There’s a great little play area on the promenade. It’s handily sited next to a café selling ice cream, fresh donuts, coffee and other essentials – we were regular visitors during our stay. I was impressed by how long the play area occupied our children, allowing us adults to be rather lazy at the café.

The beach at Cromer is a mix of sand and shingle. The sand is perfect for sandcastles. There are some rather unexpected rocks in the sea which try to trip you up when you’re stepping gingerly through the waves – a good way to get your shoulders under the water quicker than you might have planned. At low tide some of the rocks are exposed, perfect for rockpooling.

East Runton is a short stroll along the beach from Cromer. We stuck with Cromer as the facilities were handy for our large group – we stayed with two other families.

There’s a decent chippy overlooking Cromer pier, confidently named No1 Cromer. I can’t confirm whether it is the number one chippy (I’ll have to return for further research) but it does a good range of battered fish and has great sea views. I’d recommend arriving there early if you’re keen to get a table. We ate at about 5pm and managed to get a table overlooking the pier for our group of eight people.

There are plenty of family-friendly attractions near Cromer. The National Trust Felbrigg Estate looks like a full day out while also close by is the Amazona Zoo which we enjoyed on a previous visit. Another popular attraction is the North Norfolk Railway which runs steam trains between Sheringham and Holt. Incidentally, the pretty town of Holt has some excellent places for tea and cake – we once spent an entire afternoon eating in Holt during an unusually bleak May half term holiday.

We loved our stay at Manor Farm campsite and we would happily return (we paid for our stay). Have you stayed at a campsite on the Norfolk coast? If there’s anywhere you recommend, do let me know in the comments.

For more on North Norfolk, check out my article about our autumn trip to this lovely part of the country. I’ve put together an article about our favourite farm stays in the UK and if you’re after other campsite ideas, we had a brilliant stay earlier this year at Longthorns Farm in Dorset.