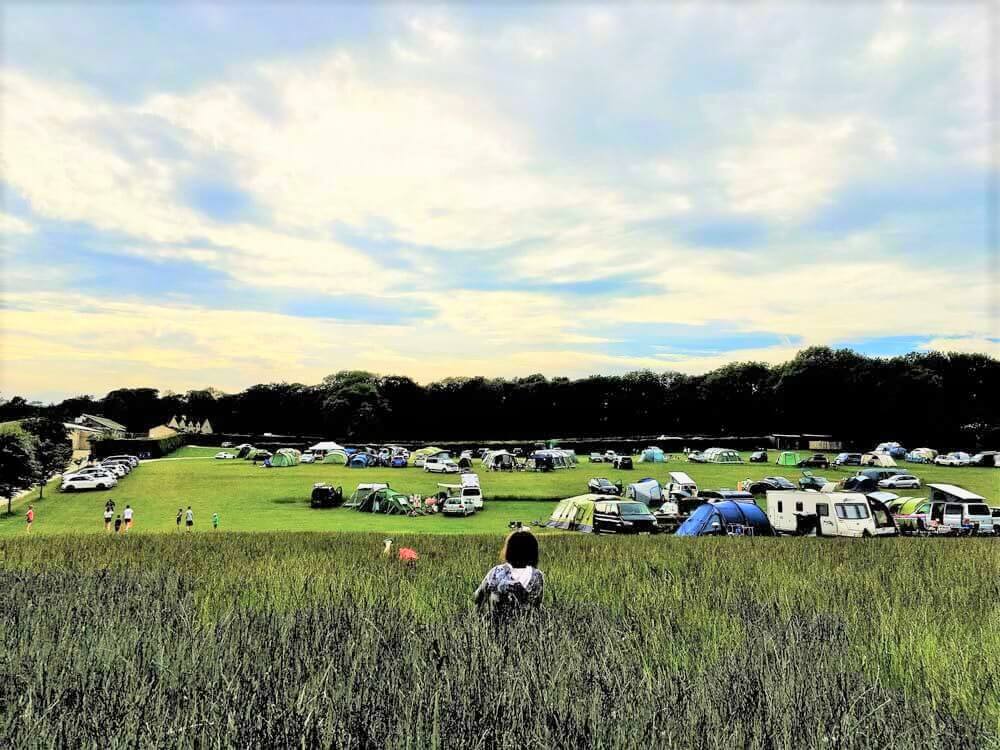 Camping in the Cotswolds: an overview of Far Peak

Far Peak Camping is located right in the heart of the Cotswolds. The campsite is a brilliant base for exploring the region and we really enjoyed our short stay there with a group of friends during May half term. Camping in the Cotswolds is a great option for families wishing to explore this delightful part of England. The Cotswolds can get extremely busy with visitors from all over the world so a campsite is ideal if you need some space to unwind at the end of a busy day.

Midway between Cirencester and Stow on the Wold, Far Peak Camping is within easy reach of all the main Cotswolds attractions such as the Cotswolds Farm Park and the Cotswolds Wildlife Park plus beautiful towns including Bourton on the Water, Bibury and Burford. It’s also within walking distance of the market town of Northleach (1 mile).

Far Peak consists of several different camping areas: there are four fields called Cotswolds, Mendips, Quantocks and Chilterns with standard pitches and electric hook ups for caravans and motorhomes. There is also a secluded area called the Glade where vehicles are not permitted (equipment is transferred via wheelbarrows). The Far Peak Glade is surrounded by woodland and is home to several glamping units including shepherd huts, bell tents and glamping domes. The domes look particularly appealing and have really lovely views over the Cotswold countryside. The Glade can also be used for standard tent pitches.

We stayed at the top of the big Cotswolds field. There is a slope on the field but this area is left unmown and does not have pitches. Our position meant we had a hedge on one side to protect us from both the breeze and the rather early morning sunshine and it also meant that we had the last of the evening sun and a good view over the site, handy for keeping an eye on our children when they went for a wander.

Read my post about the best toys to take camping.

There was a bit of road noise near our pitch but this didn’t bother us and it was generally drowned out by the sound of our children. The unmarked pitches are really generous and there was plenty of space in front of our tents for all manner of games from cricket to football and the kids played hide and seek in the long grass. It was a bit of a trek to the toilet block but I’ve now discovered the trick of drinking only alcohol after 4pm to minimise night time toilet trips. I find red wine gives me a pretty good night’s sleep when I’m camping. The kids go to bed much later and are so exhausted that they sleep incredibly well too.

The toilet blocks at Far Peak Camping are well equipped and clean. Showers were pretty good and there’s a handy freezer for ice blocks. Also on site is a climbing centre, a cafe, a small play area, a low ropes course and bike hire.

The campsite staff were helpful and friendly and the whole place had a very relaxed atmosphere. There was plenty of space and we found some lovely walking routes through the woodlands. Far Park Camping allows BBQs and it has fire pits available as well as logs for sale.

The climbing centre at Far Peak

The main reason for picking Far Peak Camping over the other campsites in the area was its climbing centre. We decided it would be fun for the kids to try something new and we liked the idea of there being enough to do on the campsite for us not to need to use our cars for the whole weekend.

The kids’ climbing sessions at Far Peak were really well organised. Our children were split into small groups based on their ages, the sessions lasted an hour for the three to six year olds and 90 minutes for the older children. The instructor in charge of our five year olds was brilliant, he had the patience and expertise of a primary school teacher, I was really impressed. The little ones started off climbing on an indoor bouldering area decorated as a castle which they really enjoyed. They then moved on to a tall indoor wall before progressing to the 15 metre high tower outside which they all enjoyed tackling to varying degrees of success!

There is a small playground next to the climbing centre which is free to use but what our kids really loved was the low ropes course: lots of rope ladders, zipwires and general clambering fun for all. There’s a charge to use this area but if you’ve paid for a climbing session it’s free.

The Hayloft cafe sells cakes and sandwiches, ice creams and various camping essentials. There’s also a pizza oven which gets fired up on various dates and is available for private hire.

Where to eat near Far Peak Camping

There are a multitude of places at which to eat and drink near Far Peak Camping. We opted to cook all of our meals at the campsite, but on our final day we headed off to a pub for Sunday lunch. I’d done a bit of advance research for this as we were a group of 16. There are tons of pubs in the Cotswolds but many of them are quite pricey so I was delighted to discover the Sherbourne Arms, 10 minutes drive away at Aldsworth (not to be confused with the pub of the same name in Northleach which gets rather mixed reviews). The staff at the Sherbourne Arms were brilliant and the food was reasonably priced and good quality.

There are lots of farm shops in the Cotswolds which have a cafe attached, I’d recommend these for good quality local fare if you’re out and about.

Other Cotswold campsites to consider

We picked Far Peak for its climbing centre but there are several other good Cotswold campsites worth considering for a family camping trip in the Cotswolds.

Cotswold Farm Park Campsite near Stow on the Wold

This well known farm park owned by TV personality Adam Henson is a really great day out for families so a stay on their dedicated Cotswold campsite should be a real hit with kids. As well as standard tent pitches, there are some appealing looking glamping tents and pods.

I was quite tempted by this Cotswold campsite as it is really small with just 20 pitches. It also has a sole use field for families or a group. It is on the eastern edge of the Cotswolds rather than in the heart of the action but I think the quality of the site more than makes up for this.

Some friends of ours visit this Cotswold campsite each year and give it rave reviews. It is in the far south west corner of the Cotswolds, closer to Bristol than it is to Stow on the Wold or Bourton on the Water. However, other highlights are on hand such as lovely Castlecombe and Westonbirt Arboretum. The site itself is set on an organic farm amid particularly stunning scenery. It looks extremely lovely…

Check out my post on glamping with kids for more Cotswold camping sites which offer a touch more luxury. If you fancy somewhere a bit closer to London, I’ve also put together an article about glamping in Hertfordshire.

Things to do in the Cotswolds with kids

We were happy to hang out at the campsite as we were only staying two nights. However, if you’re camping in the Cotswolds for longer, here are some of our favourite things to do as we are regular visitors to the region:

The Cotswolds is brilliant for walking and there are routes to suit all ages and abilities. There are some good short routes leading out from Stow on the Wold which are perfect for children, you can reward them with a cream tea or a trip to the chocolate shop afterwards!

We really enjoy wandering along the ridge from Broadway Tower as the views are particularly spectacular even without scaling the tower (ensure you visit on a clear day, see below!). If you’re after a longer walk, the Telegraph has put together some suggestions based around Cotswolds pubs.

Bourton on the Water

This is one of the top destinations in the Cotswolds and is usually packed with visitors. Our kids love the model railway (and its adjoining toy shop, beware!). There’s also Birdland, a model village and a motor museum. If you’re visiting on a hot day, it’s great fun to take a dip in one of the waterways.

Not only does Broadway have a tower to climb and wonderful walks but it also has one of the best playgrounds I have come across in the area. Broadway playground is particularly good if you have children of varying ages as there is equipment to please everyone from toddlers to teens. The two town centre car parks tend to fill up pretty quickly but we usually find a spot if we drive round one of them a few times. We love going for coffee and cake at Number 32 on the High Street.

My children aren’t taken by all of the National Trust properties we take them to but Snowshill was a hit. Once owned by an eccentric hoarder, it’s packed full of stuff reflecting a lifetime of travels and intriguing interests. There’s a good cafe and plenty of space for kids to burn off some energy.

As with all of the other Shakespeare attractions, there’s plenty of keep kids interested at the childhood home of Shakespeare’s mother (this does feel like a slightly tenuous link to the bard). Children can learn about Tudor farm life and explore Tudor homes. We enjoyed witnessing a typical Tudor meal, complete with very interactive diners…

If you’re looking for ideas of what to take camping, check out my post about family camping essentials.

After some other UK camping ideas? Here are some of our other campsite reviews:

Have you been camping in the Cotswolds? Let me know in the comments below if you have any Cotswold camping sites to recommend.

This post is linking up to the July edition of Family Friendly Stays.