I’ve done my fair bit of camping over the years. My most memorable trip was driving through the Kimberley in Western Australia in a ute, bush camping next to ancient gorges and deserted beaches. Now that I have a young family my camping trips are currently a little less exotic and tend to revolve around family camping in England but I’m keen to instil in my two boys (actually make that three as my husband is a reluctant camper) a sense of fun and adventure when it comes to travelling. I don’t want them to grow up thinking holidays are all about giant swimming pools and endless hotel buffets although my husband thinks we should give these a try too from time to time.

Camping in the New Forest

We stayed a couple of nights at Redshoot Camping Park with three other families at the end of June. It’s a big site (over 100 pitches, which is big for us) with lots of facilities: shop, playground, a decent sized shower block. It also has a pub (with kids’ playroom no less) adjoining it which proved handy for those of us who wanted to watch the Euro 2016 footie. It also has a little cottage, the Byre, to rent, should you be travelling with anyone keen to avoid a night under canvas. The shop sells freshly baked pastries as well as plenty of camping essentials; warm croissants for breakfast immediately became an essential for us. 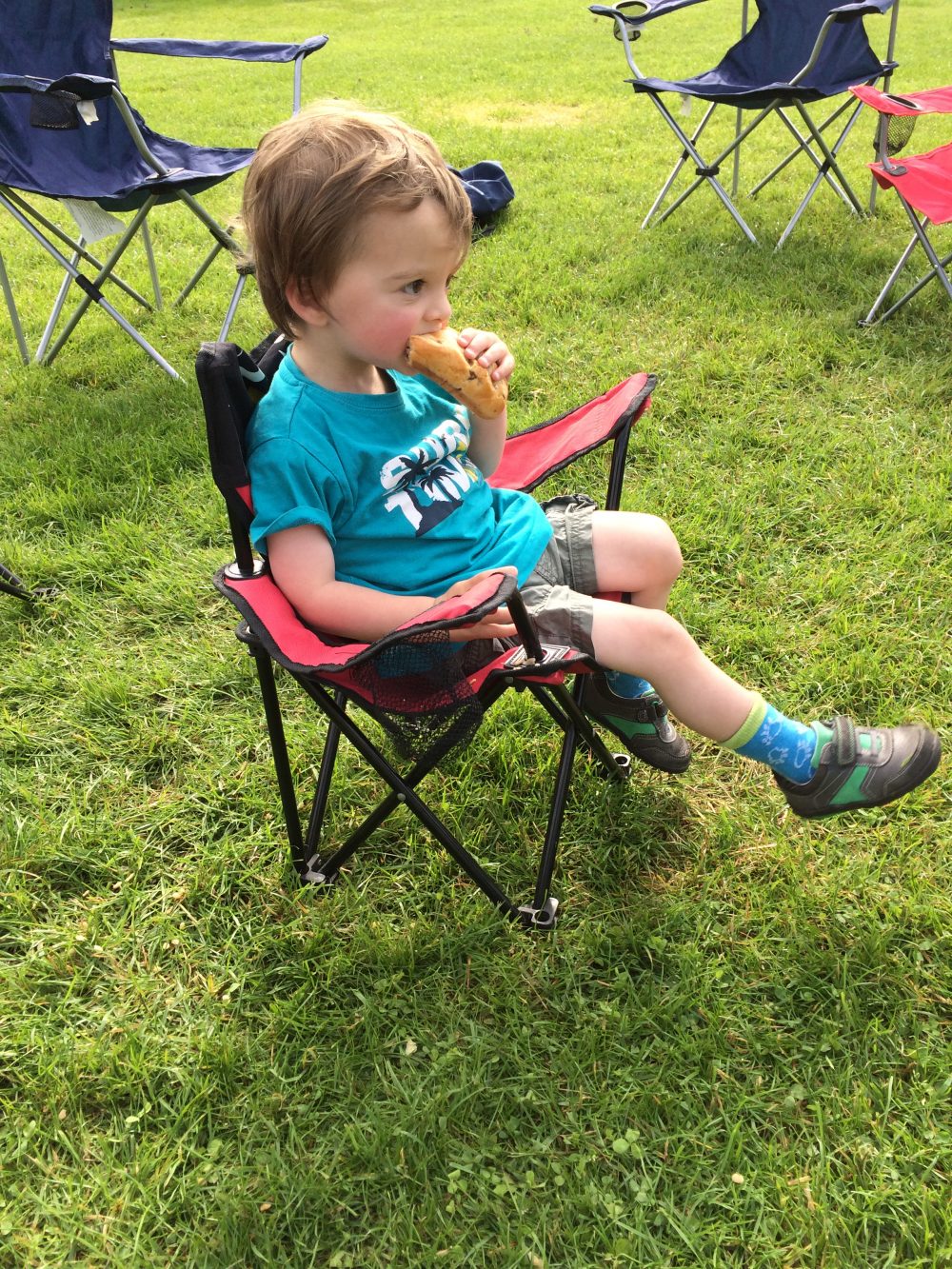 Family camping in England: croissants for breakfast at Red Shoot

The campsite is very much geared towards families and therefore does not allow groups to pitch together. This is useful for discouraging stag dos and the like but less helpful for families holidaying together such as ours, our two groups were requested to pitch in separate fields. However, given our current propensity while camping to go to bed at the same time as our children, it didn’t cause too much of a problem. Other family groups who manage to get their kids to bed at a sensible hour should perhaps take note in case they end up at opposite ends of the site once their little ones are tucked up in the tents.

Redshoot’s setting is great, located down a quiet and undulating road surrounded by heathland dotted with gnarled trees. There are plenty of walks from the site through the countryside and there’s another pub within walking distance. We had a great day out at nearby Moors Valley Country Park which is possibly the best free-entry attraction I’ve had the pleasure of visiting with my kids (you just pay for parking and some of the activities). To name just a few of the diversions on offer at this Forestry Commission-run park, there is a fantastic playground, steam railway, lakes for fishing and best of all an excellent adventure trail through the forest with wooden play structures hidden among the trees along the route. I would love to have a place like this near where we live.

We stayed at Grange Farm campsite on the first glorious day of the school holidays in July. Our location in east Hertfordshire means that we aren’t particularly close to the coast so day trips to the seaside can be tricky affairs negotiating either the M25 or a longish drive (by toddler standards) to one of Suffolk’s beaches. We had a spare weekend in between busy weeks and as the weather was fantastic (and we weren’t sure how long it would remain so) we took the opportunity to chuck the tent in the car and drive to our nearest beach for an overnight stay. 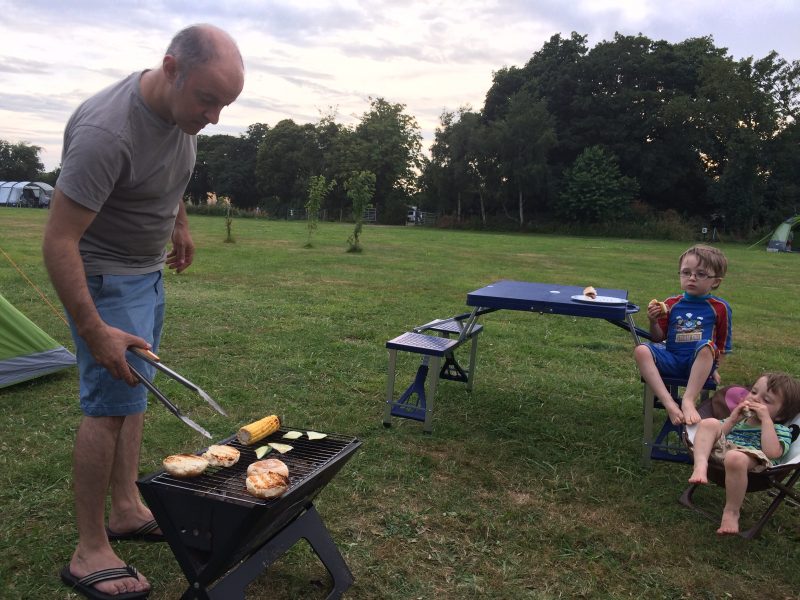 I think I typed in “campsite near Frinton on Sea” into Google and came up with Grange Farm. This turned out to be an ideal site for a last minute visit to the seaside. It is small and peaceful, ten minutes’ drive from the beach and a short walk into the village of Thorpe le Soken for provisions (useful if you’ve forgotten to pack breakfast). There are three fields, two for caravans and one which is predominantly tents. We were one of only four tents in the latter so our kids had pretty much the whole field to themselves which they loved. The shower and toilet block is small but sufficient (a new one was being built during our visit and apparently there is another one somewhere on the site but we didn’t come across it). There are lovely views over the countryside which has, to my younger son’s delight, a railway line cutting through it. The village train station has a direct service to both London and Frinton-on-Sea making this site a perfect spot for car-free seaside trips from the big smoke.

For my older son’s fifth birthday in August we headed over to the Norfolk / Suffolk border for a couple of nights at Wardley Hill Campsite. This is cool camping territory: unmarked pitches, stretches of natural wildflower meadow, various static glamping units including a bell tent with beds and a hut with hammocks. There’s also a field reserved for recreation and plenty of space for everyone to spread out. The owner informed me that he was at capacity one night but it still felt very peaceful and there was never a queue for the (one) shower. To add to the tranquil vibe, vehicles are not permitted on the campsite so wheelbarrows are supplied for transporting your belongings from the car park and campervans have a separate field (caravans are not invited).

Campfires are permitted here, in fact this was one of the main reasons I picked the site. As other camping families will no doubt agree, there’s something quite magical about cosying up together in front of the fire as the sun goes down and the temperature drops, which it did quite dramatically during our stay due to the rural location and the clear sky. Actually, as it turned out, my husband and I sat around the camp fire with other parents while our kids tore around the field charged with an energy which evaded the grown-ups.

Wardley Hill offers an eco-friendly camping experience. I tried explaining the importance of lowering our impact on the environment to my almost five year old son, who was less than impressed with the odour coming from the composting toilets. Unfortunately he wasn’t convinced, although I think the loos were pretty good considering. I wonder how he’ll fair when I take him bush camping in a less forgiving environment, probably better than his father I suspect.

Do you have any recommendations for family camping in England? Let me know in the comments below.

If you’re looking for ideas of what to take camping, check out my post about family camping essentials.