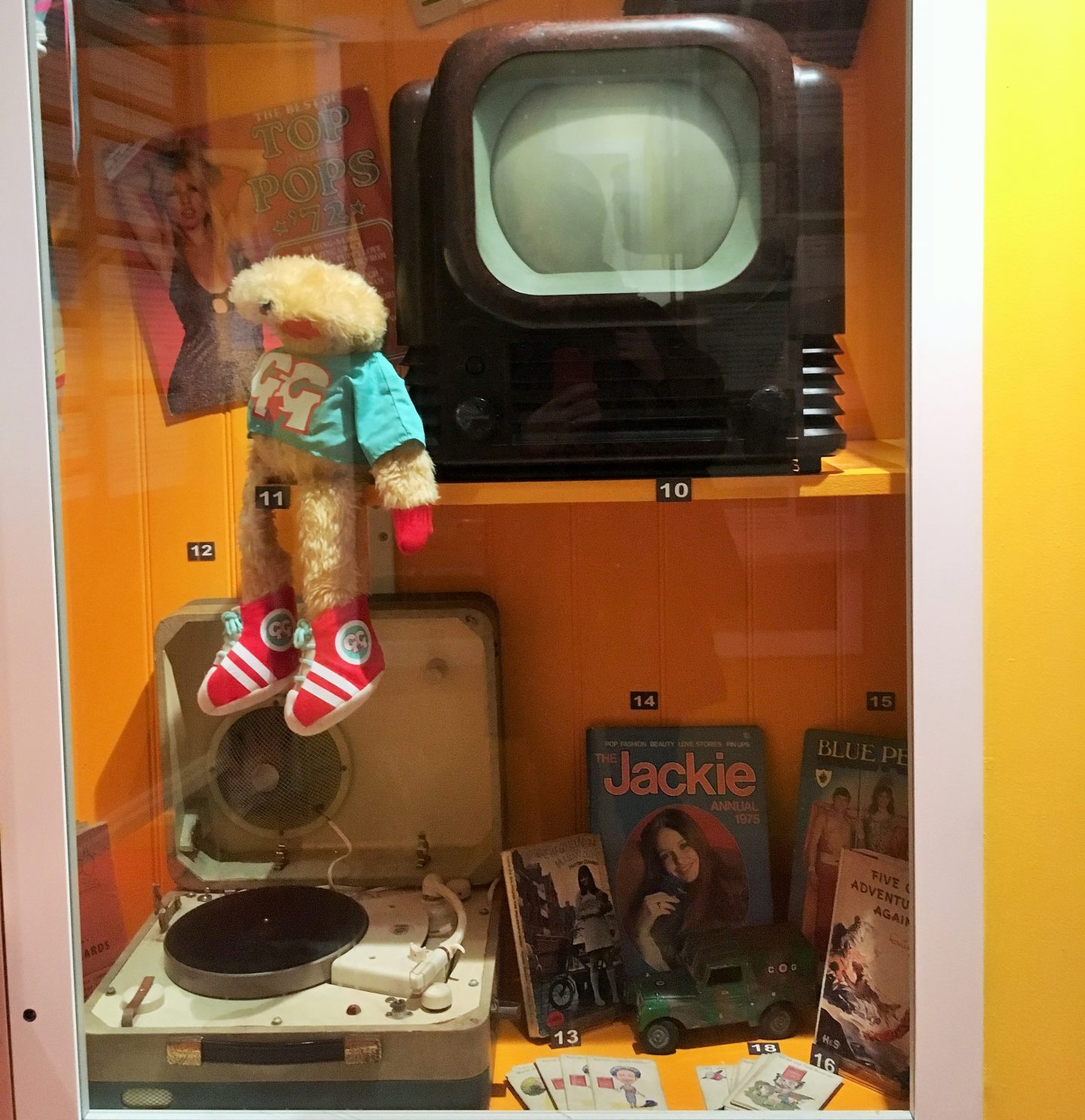 If you’re a fan of Brutalist architecture, it’s worth visiting Stevenage Museum for its location alone, set beneath the 1960s St Andrew and St George Church, which features an unusual concrete bell tower. 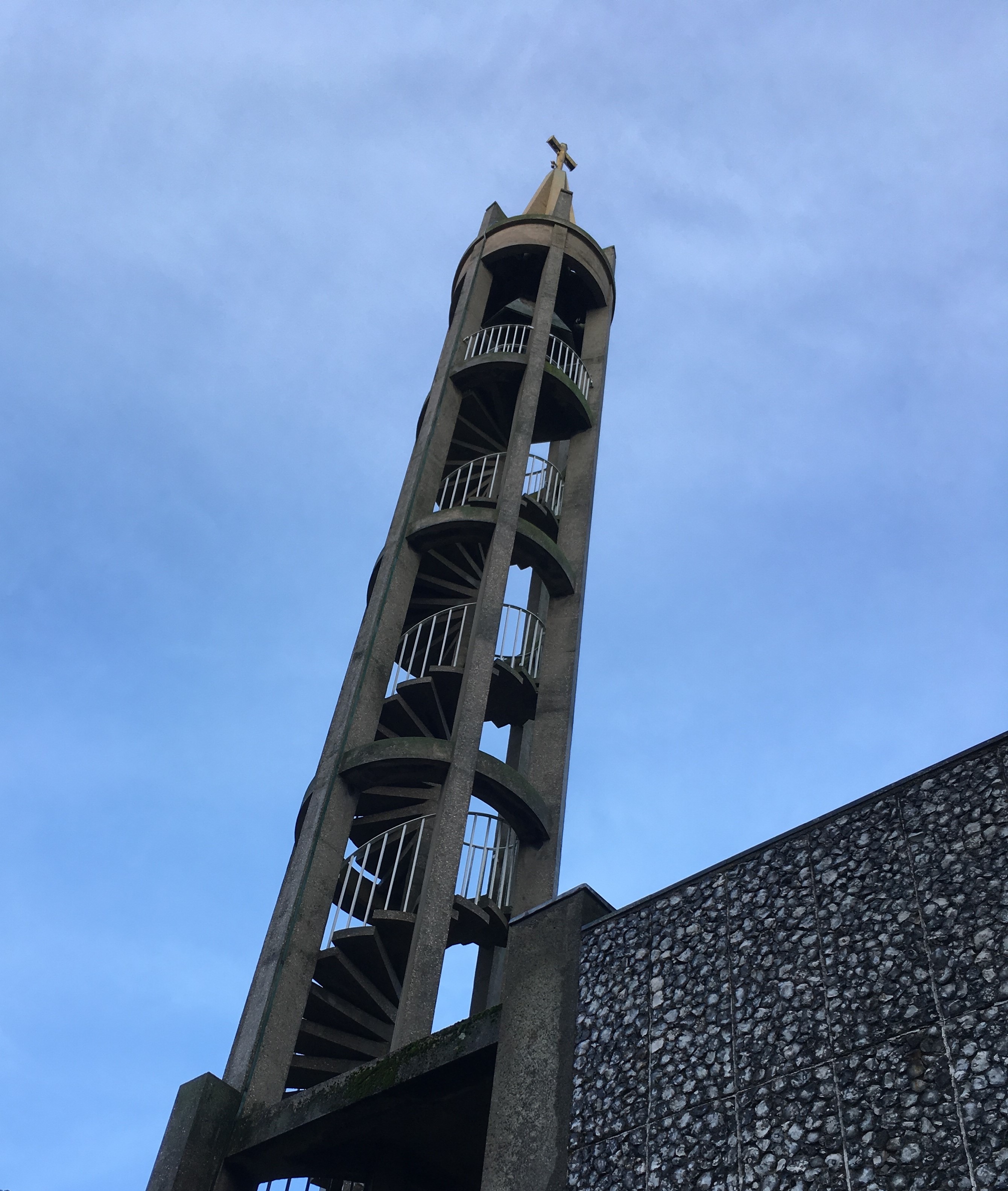 Stevenage Museum is a great place to visit with children in the school holidays. It’s free and the exhibits are easy to follow and fun for children of all ages. My children were 6 and 3 when we visited, we stayed for nearly 2 hours. 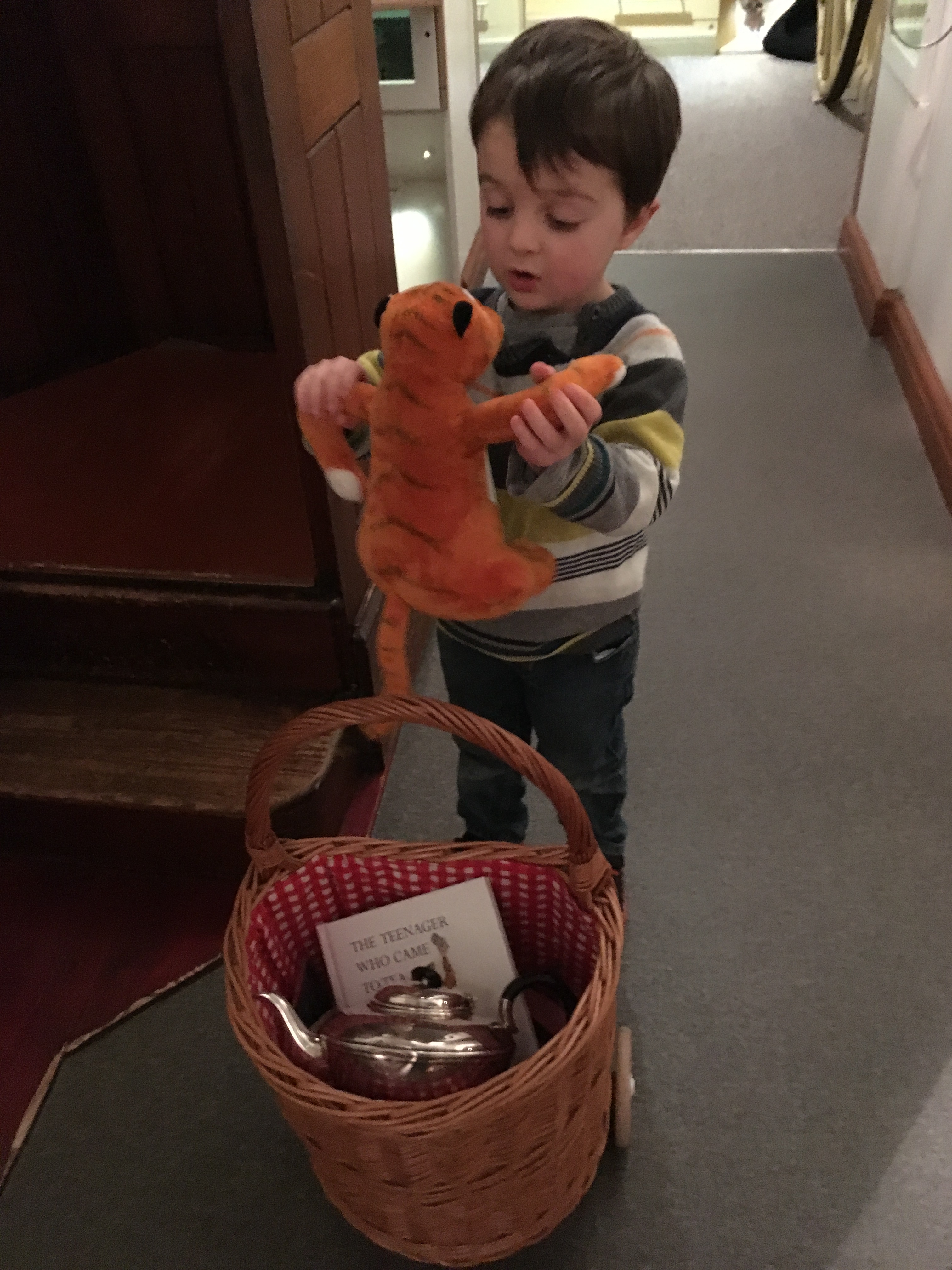 The tiger who came to tea at Stevenage Museum

On arrival we were given a little shopping basket on wheels containing a toy tiger and the Tiger Who Came to Tea storybook by Judith Kerr. The museum features a 1950s kitchen where children can role play feeding the tiger buns and sandwiches, there’s even a teapot to pour into his mouth.

Exploring the kitchen at Stevenage Museum 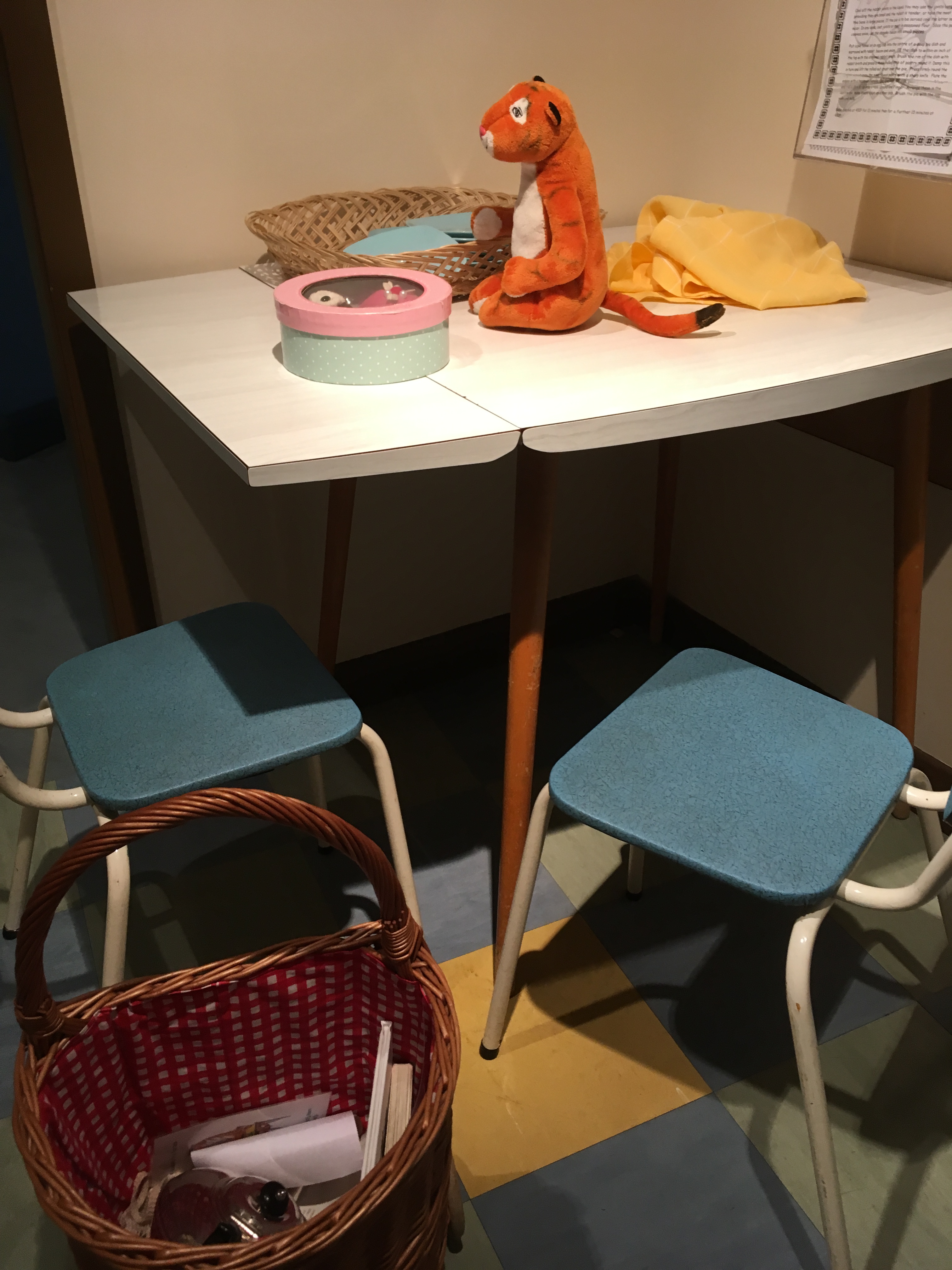 As well as tiger antics, there are several trails around the museum to engage young children. Although there’s a comprehensive audio trail (via buttons next to the exhibits), we opted for the “mobile museum” trail which involved finding items which have become obsolete since mobile phones took over the world. It’s slightly disconcerting to find objects from one’s childhood resigned to a museum (this keeps happening) but it was educational nonetheless.

Objects from our more recent past

The museum covers quite a breadth of topics from the town’s Stone Age origins to its current guise as a New Town. There are artefacts reflecting the Roman settlement discovered in Stevenage and plenty of objects from more recent domestic settings which have been donated to the museum including a washboard and plunger for laundry, a dolls house and an old fashioned television.

Learning about the Stone Age at Stevenage Museum

Throughout the museum, there are plenty of hands on experiences and interactive exhibits as well as more opportunities for role playing. I spent quite a bit of time being interrogated in a Victorian courthouse witness box but made up for it by putting my son in some stocks. 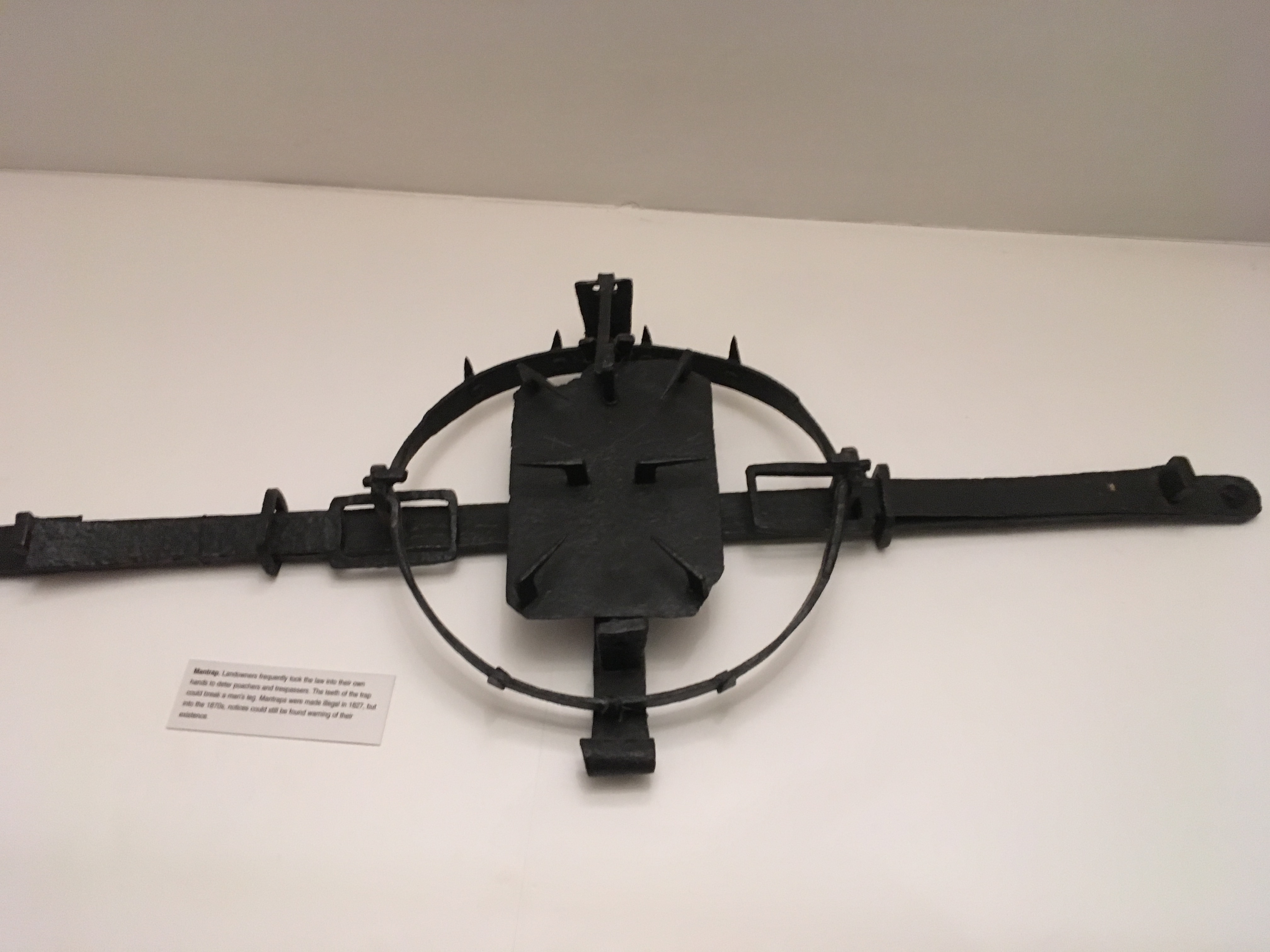 Continuing down the crime and punishment route, we discovered a rather terrifying “man trap” which would break a poacher’s leg if stepped on. These were made illegal in 1827 but took some 50 years to be properly phased out…

Many of the themes in the museum have a hat associated with them. We tried on a Roman centurion helmet, an air raid warden tin hat, and a motorcycle helmet which went with a Stevenage-built Vincent motorcycle.

The Great North Road from London to Scotland passed through Stevenage so there is an interesting section on stage coaches and highwaymen to explore, including a highwayman’s hat to try on.

We all enjoyed donning headphones and listening to “chart toppers” which included such eminent artists as Elvis Presley and er, the Spice Girls. There were various dance outfits to don such as a 60s disco frock.

A dubious playlist at Stevenage Museum

I’m always impressed by our country’s local museums and Stevenage Museum is no exception. The new town of Stevenage may not win any awards for its charm or character (although it is slowly being revamped), but its history is rich and well worth exploring with kids if you live close by. 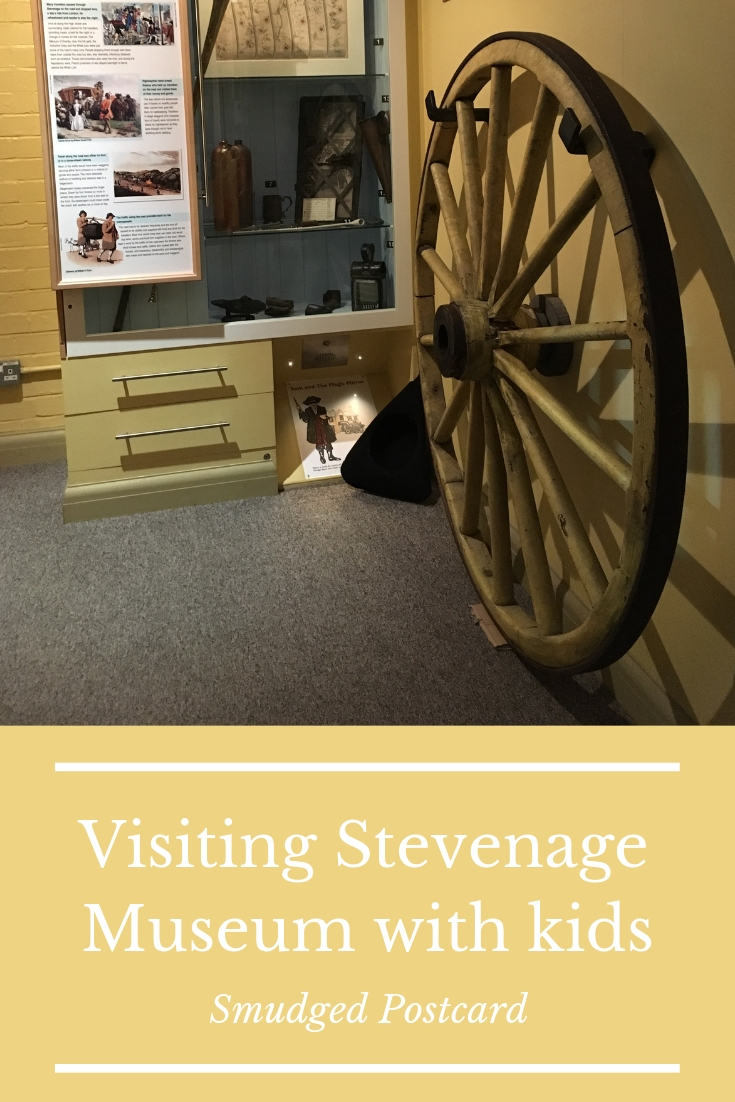