Rather predictably, my five year old son is coming home from school with an ever increasing interest in guns, bombs and tanks. So I decided to channel this enthusiasm with a trip to Duxford Imperial War Museum near Cambridge (just a 45 minute drive from where we live in Hertfordshire). Spread over several hangers and a working airfield, Duxford is vast. We barely scratched the surface but my older son came away with a huge amount of knowledge, as did I. My younger son, aged three, also enjoyed it but mostly because he could zoom along the paths on his bike, pretending to be an aeroplane. My planning of our day out consisted of printing off some helpful family trails from Duxford’s website the day before our visit. I wasn’t sure how much my boys would enjoy the museum so I thought I’d better be vaguely prepared. One of the trails, I Spy Creatures, involves hunting for aircrafts with animal names while the other one was all about camouflage. We followed these to start with but there were so many diversions that my boys couldn’t actually stay still long enough for me to read much of it. We were given a map and I bought a guide book and also an excellent sticker book for the boys called Spot it Aircraft which is essentially an I Spy book of planes, £1.99 very well spent.

Duxford was built in 1917 as a training ground for the Royal Air Force and it played a significant part in the Battle of Britain in World War Two. It is, along with the Churchill War Rooms and HMS Belfast, now part of IWM (Imperial War Museums) and is, I think, a brilliant place to bring children to educate them on the sobering reality of war, as well as being a great day out for little kids who are fascinated by vehicles.

We started our visit in Air Space as this is where the animal trail is located. Air Space is split over two floors. The ground floor contains over 30 aircraft, both military and commercial, including a Lancaster, a Spitfire and Concorde. Upstairs, visitors can explore the history and technology of aviation with plenty of hands-on exhibits for younger visitors. We had a wander through Concorde (a pre-production model) and also looked inside an Avro Lancaster. The queue for the Lancaster was pretty lengthy but we were kept entertained by staff who had a pretty encyclopaedic knowledge of this particular aircraft. It was certainly worth the wait. We were given a short talk, tailored to young children, inside the plane. We were told to look for three things; firstly an axe, used to cut a hole in the plane to escape in an emergency as there is only one door. The plane is about the thickness of a tin can. Next, we had to find the toilet, not difficult as it took up a surprising amount of space. Lastly, we had to find a parachute as these were not worn on the airmen but hung up. Apparently it was around -20 degrees and pretty dark inside the aircraft plus the sound of the engine meant that you couldn’t be heard easily so trying to locate and put on a parachute and then hack your way out of the body of the plane with an axe must have been pretty grim. The average age of these men was 18-25 years. 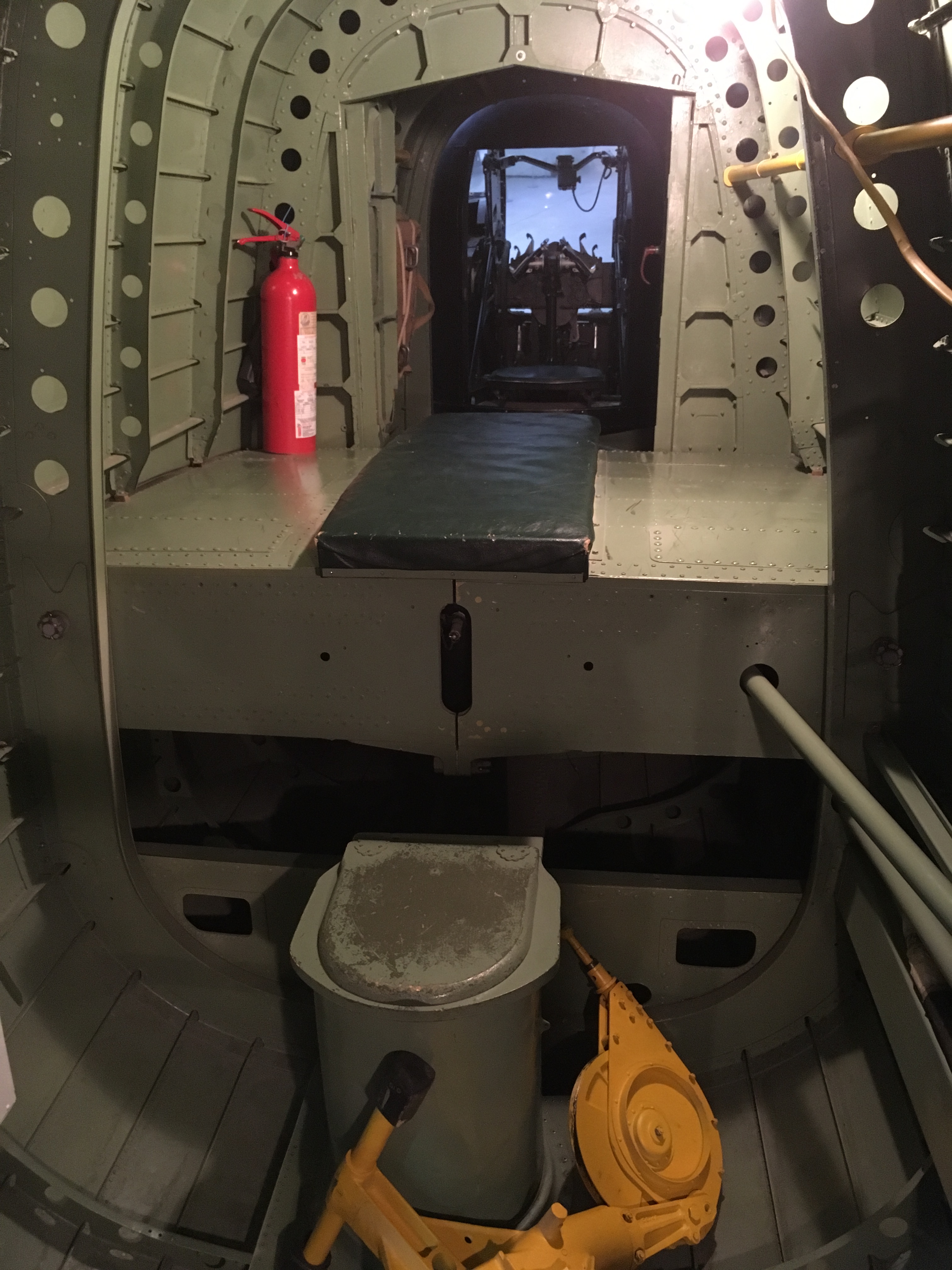 Looking towards the lonely rear turret of the Lancaster, Duxford Imperial War Museum

Although the exhibition on the upper floor sounded excellent, my boys were getting hungry so we headed out for a picnic on the grass in front of the airfield. The Duxford air show had been on the previous weekend and many of the aircraft were still on display. We were fortunate enough to watch a Bell Boeing V-22 Osprey take off. Part helicopter, part aeroplane, it was terrifying and mesmerising in equal measures. After lunch we spent some time in the playground which has a wooden plane plus various other things to climb on. It’s positioned opposite a pretty good café which sells coffee and cake, vital fuel if you’re outnumbered by your offspring. There are a number of other eateries scattered across the grounds covering everything from sandwiches to fish and chips. 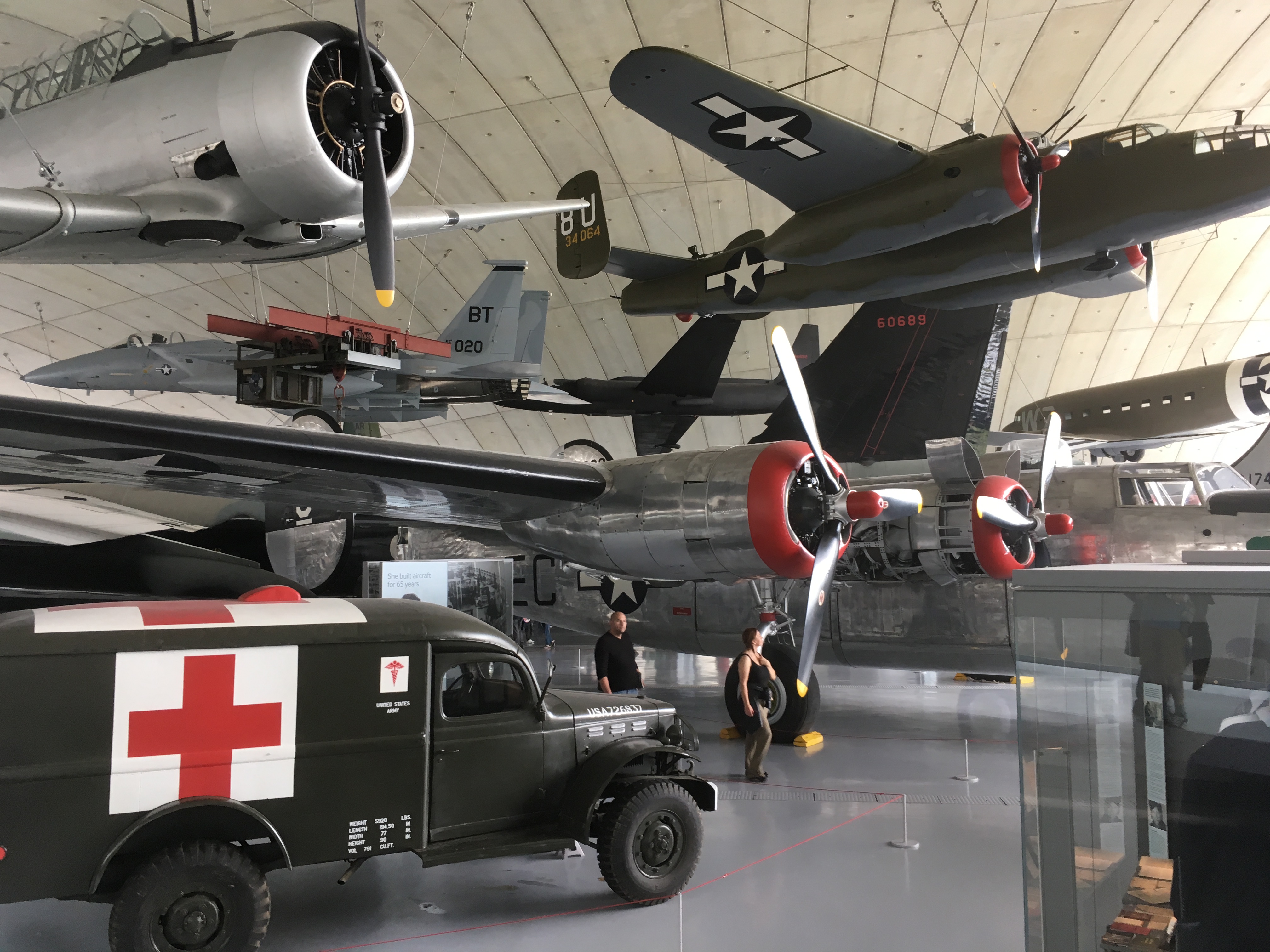 My older son was keen to visit the American Air Museum, almost a mile’s walk from the Air Space exhibition, as the camouflage trail I had printed from the website is based there. After wandering among the vast array of aircraft, my younger son started to get aeroplane fatigue so we continued on to the Land Warfare exhibition, another large indoor space this time filled with tanks, trenches and guns with sound affects to match. A lot of the more terrifying aspects of this exhibition went over my sons’ heads as they tended to concentrate on the awe-inspiring size of the vehicles but it did enable me to explain a bit about the grim reality of war. …and trying on helmets

Between Air Space and the Land Warfare exhibitions there are six other areas to explore including Air and Sea and Battle of Britain which will justify several return visits. As with any kind of cultural experience and small children, it’s best to quit while you’re ahead so after trying on helmets and attempting to pick up huge guns we headed back to the playground via a handily placed ice cream van. I’m amazed that my three year old managed to cover so much ground with only a few grumbles. The space is vast so I’d recommend a buggy if you’re visiting with little ones.

If your children have an interest in planes, boats, tanks, guns or any sort of military history, Duxford is a fantastic day out. We will definitely be returning during the summer holidays. I kicked myself when I realised we’d missed the air show by a day (it was on over the May bank holiday weekend) but actually I don’t think my younger son could have handled the noise and I would probably have lost him in the crowds. Given that there is so much to see and do there anyway I don’t think we’ll be visiting during an air show in the next few years (there are two more on this year). On the day we went it was pretty quiet and we parked right outside the entrance. Read about some of our other family-friendly museum and gallery visits: Henry Moore Studios and Gardens in Hertfordshire is a brilliant outdoor experience while Milestones Museum in Hampshire is perfect for rainy days.

If you’re driving any distance with your kids, make sure you take a look at my post on the best family friendly places to stop just off the motorway. It features play areas, parks, pubs, castles and much more!