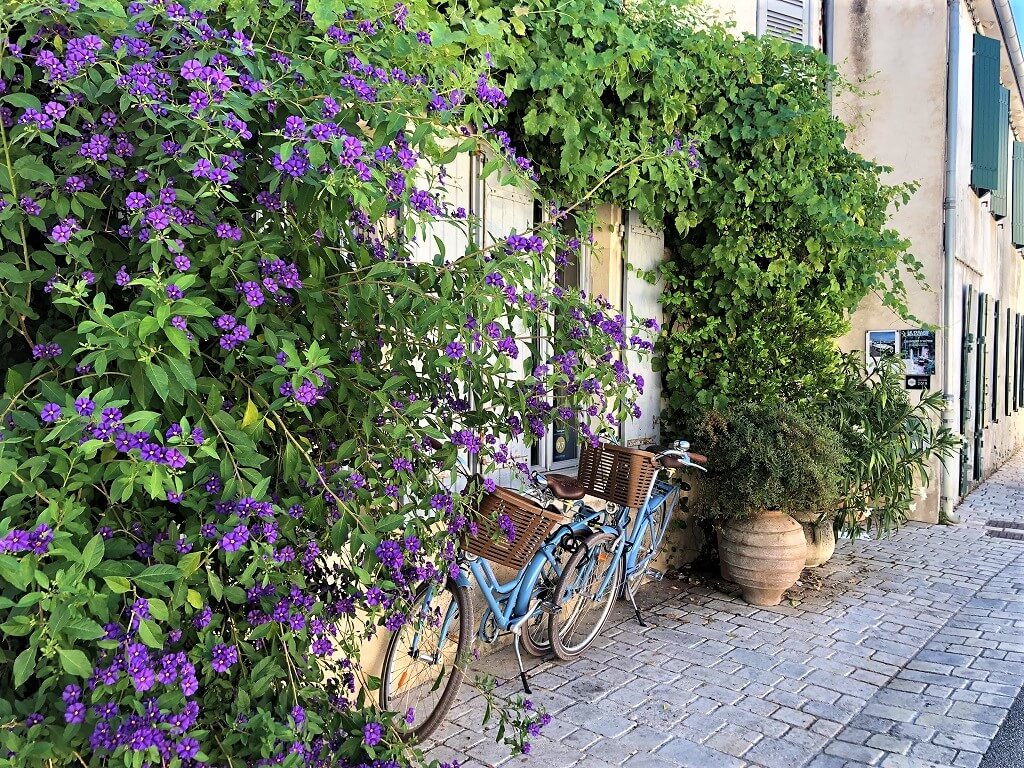 In the summer of 2022 we spent a few days exploring Île de Ré by bike with our two children (aged eight and ten at the time). The island is a brilliant destination for bike-loving families. Provided you stay somewhere central, you can explore the whole island on two wheels. In this guide I’ll explain what to expect from Île de Ré cycling with kids.

If you’re looking for more information on visiting Île de Ré with children, check out my article about Île de Ré family holidays.

What’s it like to cycle on the Île de Ré?

When you arrive, pick up a cycle map – these are available at all cycle hire shops (which in turn can be found in every village).

In these times of smart phones and satnav, it’s rather enjoyable to revert to reading a map. There are also plenty of signposts for cyclists so it’s very difficult to get lost.

Bear in mind that due to the volume of cyclists, you do need to cycle in single file – speedier cyclists overtake and other cyclists pass you travelling in the other direction so there’s not really space, in summer at least, for cycling two abreast.

Most people cycling on the island are tourists – families and couples, people of all ages. However there are one or two Lycra-clad individuals who are in a bit more of a hurry than the rest of the visitors. We had to warn our kids a few times to look out for cyclists as opposed to vehicles. Cycling on the right took a bit of getting used to for them – they’re used to us shouting at them to cycle on the left at home.

Although the island is flat, the scenery is diverse. Cycle paths run through woodland, past vineyards and salt marshes, along quiet country lanes and next to the stunning Atlantic Ocean.

Île de Ré is a small island – 19 miles by three miles – and its highest point is just 20 metres above sea level. It’s never more than a few miles to reach a café or a beach if you need to take a break.

Everyone rides bikes on the Île de Ré. We saw tiny tots on two weeks as well as elderly folk cycling with their grandchildren. It’s a very democratic experience.

Tips for hiring a bike on Île de Ré

Most bikes for hire on the Île de Ré are the city bike type – quite heavy and slow (not a problem on the pancake-flat island) with an upright riding style.

You can usually include a basket when you hire a bike on Île de Ré. These are either slotted onto the front or pinned to the back with bungee cords. If you’re visiting Île de Ré during hot weather you’ll be glad not to have all your beach gear strapped to your back.

If you’re planning to be out late in the evening, ensure you have bike lights – some rental bikes come with dynamo lights which light up automatically when you pedal.

Most bike shops shut at around 7pm. If you’re only hiring a bike for a day or two, bear in mind you might be better off dropping the bike back after breakfast the next day rather than missing a relaxing harbourside dinner by trying to get the bike back before closing time.

Do you need to hire a bike on the Île de Ré?

The population of Île de Ré swells from around 20,000 to over 200,000 during the summer and the roads reflect this. Entering the villages in the morning can be a slow process if you’re in a car with traffic jams and cars stopping to let bikes cross the roads.

You’re definitely better off on a bike – there’s always somewhere to park your bike but car parking can be tricky.

It was really satisfying to turn off from a road onto a quiet woodland trail – it felt really peaceful exploring the island by bike.

Is it safe to cycle on the Île de Ré with kids?

Yes – compared to roads in the UK, Île de Ré is much safer. There are dedicated cycle paths linking the villages and beaches across the island. There are more bikes than cars so drivers give way to cyclists – it felt so utterly different to our cycling experience in the UK.

What are the roads like on the Île de Ré

There are a few roads – key arteries – which are motor vehicles only –  or rather, where cyclists choose not to travel. Everywhere else you’ll find cyclists outnumber cars.

It’s a pleasant surprise to discover that drivers on the roads on Île de Ré give way to cyclists and pedestrians – they’re forced to, due to a safety in numbers mentality in the cyclists. On the one day when we drove across the island we discovered that plenty of cyclists do not even look before they cross in front of you – presuming instead that you’ll stop for them. It does take a bit of getting used to.

The main arteries used by cars were busy. After a couple of days of exploring the island by bike, our drive across Île de Ré was frustratingly slow with traffic building up at the approaches to towns.

Do you need to prebook bikes for the Île de Ré?

We arrived on the Île de Ré in the second week of August. There were still plenty of bikes available in all the hire shops. Many of the hotels and campsites also offer rental bikes.

If you want to hire a tagalong or a trailer, it’s worth pre-booking these in advance.

Do you need bike helmets on the Île de Ré?

We brought our bike helmets from home but they are available to hire at all bike shops. Helmets are mandatory for children under 12. Most adults weren’t wearing them but we stuck with what we know and wore ours. There’s a high chance children (or adults) may collide with fellow cyclists as opposed to other road users. Bikes are everywhere.

Have you cycled on the Île de Ré? Let me know your thoughts in the comments below.

Paris in winter with kids